2018: Another Malay World: Dislocation and Dissonance between the past the present. In S.K. Manickam, G. Oonk & A Stipriaan (Eds.), History @ Erasmus: Histories of Encounters (pp. 56-59). Rotterdam: Eramus School of History and Communication

2018: "Solidarity in an oppressive world? The paradox of Malaysia-African interactions in Higher Education", in Cynthia Joseph (Ed), Policies and Politics in Malaysian Education: Education Reforms, Nationalism and Neoliberalism. London: Routledge, 2018.

2015: "Not Just Skin Deep: Ideas of Racial Difference in Genetic Studies on Orang Asli from the 1950s", in Malaysia's 'Original People': Past, Present and Future of the Orang Asli, ed. Kirk Endicott (Singapore: NUS Press, 2015)

2014: "Bridging the Race Barrier: Between Sakai and Malays in the Census Categorisations of British Malaya", Asian Studies Review 2014: 1-18

2014: "A Russian in Malaya: Nikolai Miklouho-Maclay’s Expedition to the Malay Peninsula and the Early Anthropology of Orang Asli", with Elena Govor. Indonesian and Malay World 42 (123): 222-245.

2012: “Situated Thinking: Or how the Science of Race was Socialised in British Malaya”, Journal of Pacific History 2012, ifirst, pp. 1-25

2016: Sandra Khor Manickam and Iioka Naoko, "Preface" and "Note on the Translation", in Translation of Japanese Entries in the Bibliography on the Japanese Occupation of Malaya, Singapore and Northern Borneo, 1941-1945, October 2016, pp. 1-6. 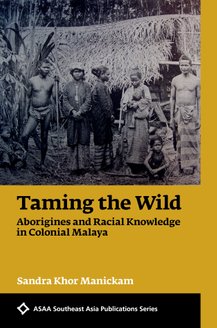 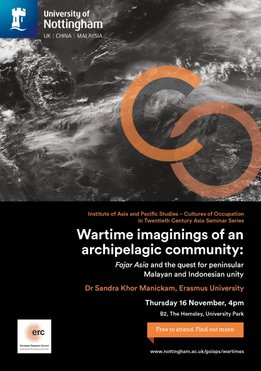 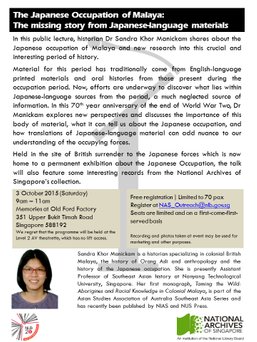 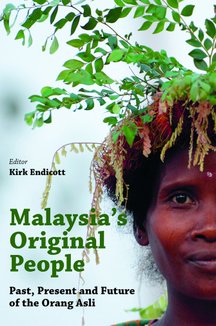 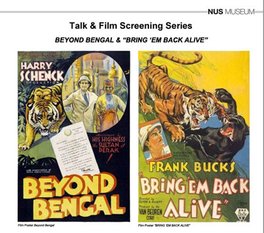 "The Japanese... had little or no knowledge of the disease: Malaria as the site of colonial knowledge claims." University of Sydney, Asian Studies Association of Australia. 3 July 2018.

"The Japanese... had little or no knowledge of the disease." National Library of Indonesia Building, Jakarta, History of Medicine in Southeast Asia Conference, 27 June 2018.

"Wartime imaginings of an archipelagic community: Fajar Asia and the quest for peninsula Malayan and Indonesian unity". Talk for the ERC-funded project Cultures of Occupation in Twentieth Century Asia' (COTCA) project, at the University of Nottingham, 16 November 2017.

"Technocracy in a Time of War: Governing Malaya and Singapore during the Japanese Period". Talk at conference Government by Expertise: Technocrats and Technocracy in Western Europe, 1914-1973, on  on 13-15 September 2017

"Malaria in Malai: Health and Medicine during the Japanese occupation", in Proposed Panel: A Historical Perspective on Malaria and Southeast Asian Armed Conflicts

Keynote speech: “The Durian in the Room: Power and Difference in Southeast Asian Studies across continents", at the 2nd Student Southeast Asia Conference, 19 to 21 May 2017, Campus Westend, Goethe-University Frankfurt am Main.

Talk at the Center for Historical Culture, "Rethinking 'occupation' and 'colonialism' in Malaya: The case of Japanese migrants and the medical profession in the Malay Peninsula" on 18 May 2017, at Erasmus University Rotterdam, with Naoko Iioka

Paper title: Dissemination of information during the Japanese Occupation of Malaya

Individual Paper: "The use of history in legal battles with the Malaysian state"

For the 20th anniversary of the National Library Board, historian Dr Sandra Khor Manickam talks about the Japanese occupation of Malaya and new research into this crucial and interesting period of history. Material for this period has traditionally comes from English-language printed materials and oral histories from those present during the occupation period. Now, efforts are underway to discover what lies within Japanese-language sources from the period, a much neglected source of information. In this 70th year anniversary of the end of World War Two, Dr Manickam explores new perspectives and discusses the importance of this body of material, what it can tell us about the Japanese occupation, and how translations of Japanese-language material can add nuance to our understanding of the occupying forces. Held in the site of British surrender to the Japanese forces which is now home to a permanent exhibition about the Japanese Occupation, the talk will also feature some interesting records from the National Archives of Singapore’s collection.

"Solidarity in an oppressive world? The promise of Malaysia-African interactions in Higher Education"

Organised by Frauennetzwerk, Normative Orders Excellence Cluster of the Goethe University of Frankfurt, 2-3pm, 9 July 2014, Haus Normative Ordnungen/Lounge. Part of a series of talks by women academics about their career and motivation.

"Not Just Skin Deep: Ideas of Racial Difference in Genetic Studies on Orang Asli from the 1950s"

"Malaysian Educational Exports in Africa: the case of Limkokwing University"

"History of Ideas of Race In the Malay World"

"History of the Ideas of Race in Hikayat Dunia"

"Working and Living Together: Realities of Life for Africans in Asia and Asians in Africa"

"Drawing blood at a time of emergency: new studies of Orang Asli during Malayas decolonisation"

"Racial imaginings in Post-colonial Malaya: New Technologies and Indigenous blood in the 1950s"

Conference on Inter-Asian Connections III: Hong Kong (June 6-8, 2012), The Hong Kong Institute for Humanities and the Social Sciences (HKIHSS) at the University of Hong Kong

The movie “Beyond Bengal” was written and directed by Harry Schenck and released in the USA in 1934. Shot in Perak, British Malaya, with the cooperation of the Sultan of Perak and the assistance of colonial officers, the film is part of the genre of exploitation films, exposing the deep, dark recesses of the jungles of faraway places. The film features a mix of National Geographic-like footage of Perak in the 1930s, elements of exotic exploitation in the love story between two natives, and it injects a good measure of horror in the scenes of crocodiles eating humans.

Bewildering, entertaining and truly a movie of its time and culture, “Beyond Bengal” will be shown in tandem with an episode of 1980s American television series “Bring ‘Em Back Alive!”, which focused on the life of animal collector Frank Buck in Singapore and Malaya, to show the fascination American movie-makers had about Malaya, and their attempts at representing Malaya through film.

Abstract: Russian ethnographer N. Miklouho-Maclay is well-known to historians of anthropology for his ethnographies of Papuans and for immersing himself in the field for prolonged periods of time. Though his interests centred mostly on New Guinea and areas east of that island, he also undertook two anthropological trips to the Malay Peninsula between November 1874 and October 1875 in order to study the Orang Utan as indigenous peoples then were sometimes named. Drawing on a newly available translation of his diaries from his first expedition, and Miklouho-Maclay’s own drawings and publications from his trip, this talk will explore the writings and representations of one of the first professional anthropologists to study indigenous peoples of Malaya and the uncertainties of racial identification in the late nineteenth century.

"Meanings of Indigeneity in Malaysia: Looking at the Present and the Past"

Abstract: The issue of cultural rights in Malaysia is intricately tied to the construction of indigeneity through time and how this then determines who is considered to be the primary indigenous group in the country. This paper will focus on the history of ideas of indigeneity in Peninsular Malaysia and draw out some resonances with, and implications for, cultural rights issues. Of particular interest is the way that knowledge production by British anthropologists on “aborigines” or “indigenous” peoples of the Malay Peninsula was linked to stereotypes of the dominant, and also native, group referred to as Malays. The presence of these two broadly construed groups, depicted by scholars as separate yet related “races”, complicates the assignation of indigeneity and the accompanying treatment at the hands of the British Malayan colonial state in the late 19th and early 20th centuries and the nation-state of Malaysia after 1957. Looking at the historical construction of indigeneity in colonial Malaya, this paper will show that the boundaries of indigeneity appeared straightforward at first glance but were in fact problematic upon further analysis. Today, the complexity of the issue is used by political and social groups in Malaysia to pit various indigenous claims against one another.

"Constructing Indigenous Peoples in Malay and English: Translation and the Transmission of Ideas in the Malay Peninsula", Presented at Goethe University, Frankfurt am Main (27 May 2011)

"Counting Aboriginal Bodies in Malaya: Colonial government, the census and the protection of aborigines", 21st Conference of the International Association of Historians of Asia, National University of Singapore, Singapore, June 2010

"The Science of Race and Colonial Conditions in Malaya", Race, Encounters, and the Constitution of Human Difference in Oceania (22 January 2010) Australian National University, Canberra

"A critical history of anthropology of 'Negritos' of Peninsula Malaya: the racialisation of indigenous groups through texts, illustrations and photography by travellers and anthropologists, 1820-1920", Division of Pacific and Asian History Seminar Series, Coombs building, ANU, October 2007

"Ideas of Nation and Malayness in Malaya", International Conference on Malaysian History, University of Malaya, August 2004